(No idea when I wrote most of this….)

Next time you go up the 5 through the Grapevine, and come to the place where Highway 138 comes in, you’re crossing the San Andreas Fault. Fault zone, really. It’s fairly wide. You can see it on the highway itself, which is in permanent repair–shifting earth makes for busted up concrete. And you can see it in the land itself…take a look at that rippled terrain. It smooths out again as you go towards Gorman. And south of there is just steep hills and canyons/valleys. But right there at the junction you can see how the terrain is being pulled apart and pushed together as the plates grinds past one another. And dig the intense folding in the exposed layers of rock. Hard to imagine the force that can warp and bend solid rock like that. People and everything we are are nothing compared to that sort of force. If you’ve ever been through a serious earthquake you know what I mean. That feeling of being very small and squishy and fragile as huge forces erupt under our feet. And then there’s the whole deep time thing. Our lifetimes barely measure a century, pile up those centuries and you’ve got a hundred, maybe two hundred thousand years and, I’m sorry to say, that’s about as far as human time goes. If you want real recorded history, then you’ve got only a few thousand years. Big things happen in a few thousand years, big human things, civilizations rise and fall. But all those things are nothing in deep time. Just a finger snap. A flicker. A match flaring and going out again. A human lifespan is a nanosecond of deep time. A million years is a small integer in deep time. But the earth happens in deep time. The plates move in deep time. Continents drift in deep time. Rarely does human time and deep time intersect, though when they do it is with terrifying suddenness. The world shakes and big beautiful concrete ribbon freeway exchanges collapse.

You’ll notice that the folding along the rest of the drive is more linear…it still dips and curves, but it appears to be under much less compression, and hasn’t fragmented. I love how you go from the Pacific Plate to the North American Plate right there. The North American plate is some ancient rock, man. Going way back. In the very center–the American Midwest–it’s what they call a craton, a really ancient slab of continent. Flat, with thousands of feet of soil on top. In California the North American plate is what they call orogenic, all tore up and mussed up and stretched and pulled and broken from the plates sliding past one another. All our beautiful California topography and localized ecosystems and microclimates are the result. I think, if I remember my revisionist geology right, that the stuff on the Pacific Plate side is probably all kinds of islands and the like compressed into a mess as the Pacific plate pushed east. So southern California is a conglomerate of junk all moving northeast at a remarkably fast (tectonically speaking) three to four inches a year, while the North American plate is land that has been there a billion years through the comings and goings of various supercontinents. It’s moving, too–the entire surface of the globe is moving and will till the planet’s insides grow cold–but it moves at a comparative crawl and in a southwestern direction. The two massive plates grind past each other. Sometimes they stick in places, and when they unstick all hell breaks loose. That’s what happened to San Francisco in 1906…the plates came unstuck.

If it weren’t for earthquakes and the occasional panic when someone points out a fault running through the middle of Hollywood (perfectly visible to geologists) people would never see the evidence of slowly moving earth all around them. You’d never notice it here in Los Angeles, too many distractions, too many things to do, too many buildings and streets and parking lots and whatever cover it all up. There are faults running every which way through the Los Angeles basin–I’m sitting right on top of the Elysian Park Fault as I type–but people kind of pretend they aren’t there. And though potentially dangerous, these are all just little things compared to the San Andreas. Faults in this town are the result of all kinds of local pressures–basically the Pacific Plate being squeezed up against the North American and everything getting scrunched up and cracking like plaster on a slowly buckling wall–but the San Andreas is the big time, two plates coming together. The earth’s core is so hot that the mantle around it has liquid properties and the crust, the stuff we live on, sort of floats atop it, plates wafting in currents,  pushed by the mantle emerging from great fissures in the ocean floor and forming new crust. The plates are shoved into each other. Sometimes one pushes on top of the other and the loser is subducted back down into the mantle. Earthquakes of terrifying power can occur then, bigger than San Francisco’s even–Anchorage was virtually destroyed by one like that in 1963. Japanese civilization sits precariously atop another such subduction zone. Luckily here in California the plates exist in relative peace, pushing past each other. A little rough, but nothing tectonically existential. I know this may seem relative if you live in, say, San Francisco or Santa Cruz or the Coachella Valley or even Gorman. A 7.5 or so earthquake is just as scary to think about as a 9.5. You’ll still lose all the fine china. But the street won’t suddenly drop twenty feet.

Up the Grapevine you can see the effects of all this movement. You can see it because that whole pass is pretty much beyond the reach of civilization. Miles and miles of beautiful nothing and the occasional ranch house or empty farm or inevitable McDonalds. There’s all that land there, all those hills and bluffs and cliffs revealing tens of thousands or hundreds of thousands or even, in spots, millions of years of slow geologic history. You can see the forces at work. But only a frame at a time. Our entire lifespans are only a few feet in geologic time. If you live to be eighty years old and live in Los Angeles the land will have moved north with you on it maybe eight feet. Two hundred human lives laid end to end would see the Pacific Plate move northwest less than a mile. That’s it. And though relatively fast in tectonic terms, it’s not much progress. Just about nothing. Meaningless even. People will come through the Grapevine a thousand years from now and see all those rocks, and the rocks will be in the same place, pretty much, as when I last looked. A few landslides will shift things around, some flash floods. Otherwise, though, you’d never know anything had moved at all. A thousand years from now (and one hundred and twenty five feet from here) you and I will be long forgotten. That is just a hint of geologic time. That is the deep time we flit about in, changing nothing. 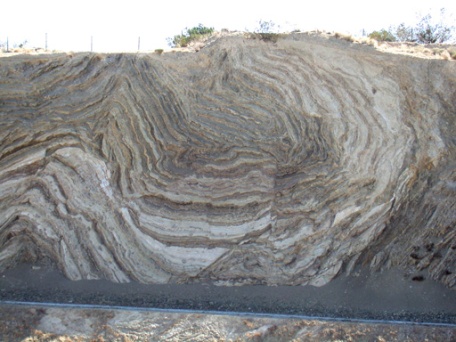 The San Andreas Fault…dig the layers there. They were originally laid down horizontal and quite flat. Now they’ve been compressed and rolled into a strudel. How much time are we seeing there, a million years? More?

This site uses Akismet to reduce spam. Learn how your comment data is processed.

My latest writing at: Brick Wahl

Just remembered I used to tool around Milwaukee on warm summer nights in Pete Fountain’s MG. How I got all 6’5” of me in there I don’t know, but Fyl and I had a ball. Her brother in law had bought it off Pete one weekend in New Orleans after a night of gumbo and […]

When I first got my cell phone with the 420 prefix a really stoned guy called and thought I was a pot delivery service. I apologized and said I was not. Dude, he said. I thought it was a prank call but the depth of his confusion and despair was profound and convincing. Dude, he […]

My latest writing at: Brick's Picks

Watched Downstairs last night, from 1932, in which John Gilbert is incredibly convincing as a vile, thieving, conniving lowlife of a chauffeur with no redeeming virtues whatsoever. Weird choice of role for a leading man with a career on the rocks, weirder still that he’d written the story himself and wanted to do it so […]

Sorry there’s no more of the great gobs of prose I used to spill out all over these blogs. People have been asking. Alas, epilepsy was really fucking with the long essays, and I finally had to stop. Had to stop working too. Had to stop just about everything. It’s been a couple years now […]

My latest writing at: Brick's Politics

Remember when Reagan said ketchup was a vegetable?

We Are All the Suez Canal

My latest writing at: Brick's History

Sorry there’s no more of the great gobs of prose I used to spill out all over these blogs. People have been asking. Alas, epilepsy was really fucking with the long essays, a d I finally had to stop. Had to stop working too. Had to stop just about everything. It’s been a couple years […]

My latest writing at: Brick's Brain

Sorry there’s no more of the great gobs of prose I used to spill out all over these blogs. People have been asking. Alas, epilepsy was really fucking with the long essays, and I finally had to stop. Had to stop working too. Had to stop just about everything. It’s been a couple years now […]

These sentences seem adrift on their own

[from 2019, I think] Head on a floor cushion I just woke from a three hour nap on the floor in front of the TV. If I hadn’t had to piss I’d still be asleep there. Woke up having no clue what time it was. 3 am? 7 am? That panicky retired guy sensation that […]