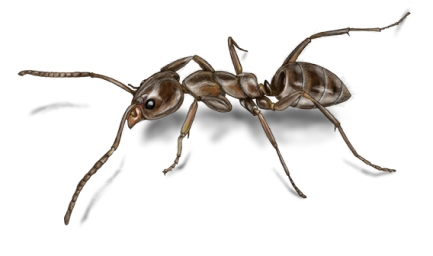 An argentine ant, courtesy of Orkin.

One of my favorite ant things–the genetically uniform super colony of Argentine ants that stretches from San Diego to San Francisco–may not be a genetically uniform super colony of Argentine ants that stretches from San Diego to San Francisco after all. Scientists are still testily debating it. Even in the very dry Science Daily article linked below you can sense myrmecologists getting angry. “How can they be genetically homogenous across wide, wide scales [i.e., San Diego to San Francisco] when they’re not even genetically homogenous across hundreds of meters?” A pro-super colony scientist sighs and reiterates the reason that it is a supercolony. It goes back and forth. No decision.  But the article gives the skeptics a final poke. “This story [about the supercolony] has really captured the imagination of the public, and it’s somewhat frustrating” a revisionist myrmecologist complains, “But it’s such a neat story, people sometimes don’t want to hear conflicting evidence.” A cheap shot, sure, but it made me squirm. Her colleague piles on. “I think real ants are much more interesting than the stories we make up about ants. We’d have better stories to tell if we started with the actual data.” The article ends there. The pro-supercolony scientists don’t get a shot back. It’s a little unfair. Meanwhile, I’ll have to wait to see how this turns out, being that I believe I’ve written on this supercolony a couple times and therefore may be spreading alternative facts faster than a myrmecological Kelly Anne Conway. But to be honest I hope the revisionists are wrong, because it really is a neat story, this huge gnarly supercolony of genetically identical tiny little ants beneath our feet. I hate to give it up. Of course science doesn’t really care what you hope is true. Nor do ants, for that matter. I was just looking at an argentine ant on the kitchen counter this morning. She said nothing but scurried away before I had a chance to squish her.

2 thoughts on “So maybe it’s not an argentine ant super colony after all.”

This site uses Akismet to reduce spam. Learn how your comment data is processed.

My latest writing at: Brick Wahl

Greg Romero, aka The Pope

Fyl and I had so many great times with Pope. Probably the most fun times I’ve ever had were those hundreds of times we picked Pope up—imagine trying to get him out of the house each time—and took his endlessly babbling self out to some spot or another. Then, hours later, it took forever getting […]

So as part of our winter cleaning and destuffication campaign, I went through my remaining records, pulled half of them and a friend, thrilled, took them home. Probably 300 or 400 albums worth. (Ever behind the trends, I’m all about CDs and YouTube rather than vinyl). I used to have thousands of records. Anyway, our […]

My latest writing at: Brick's Picks

Picked up this album from 1973 in the back room at Rockaway probably twenty some years ago. Sale day and everything in that room was 75% off and nothing had been over three bucks anyway. This was the nadir of vinyl, everyone was buying CDs and most records weren’t worth much of anything anymore. Those […]

Just love this, Terry Reid—I so dig his voice and guitar playing, both unique as hell—performing ”Dean” at Glastonbury Fayre in 1971. He’s got David Lindley (Kaleidoscope had called it a day in 1970), and that’s Alan White laying down an incredibly loose unYes groove on the traps, and just as the tune is ending […]

My latest writing at: Brick's Politics

There is no easy out of this except by winning more seats in Congress.

All of sudden abortion law in this country since the Supreme Court threw out its Roe v Wade ruling, is no longer a federal issue at all. It is entirely a matter for the states. Unless Congress were to codify those protections into federal law, there is not a damn thing President Biden can do. […]

Remember when Reagan said ketchup was a vegetable?

My latest writing at: Brick's History

Here’s a virtual reconstruction of the city of Ur around 2500 BC or so, or upwards of five thousand years ago. This is based on the remarkably well preserved mud brick structures (due in part to the dry climate, and in part to the excellence of the construction), which gives a blue print of the […]

Shoe of an ordinary Roman soldier, a legionary, discovered while excavating a Roman fort in Germany. These were just workday shoes, perhaps not worn on campaign but certainly when tooling around the camp in the long months between. Just ordinary Roman footwear. The workmanship and detail look like something you’d pick up at Target today. […]

My latest writing at: Brick's Brain

Watching Laura for the zillionth time and Waldo Lydecker just had his seizure. I hope, says a recovered Clifton Webb to a radiantly overbit Gene Tierney, you’ll forgive my wee touch of epilepsy, my dear. Clifton Webb could sure say a my dear. He drops to a near whisper. It’s an old family custom he […]

(December, 2016) There are various parts of the brain that create our various senses of happiness, and all have been recorded in various ways many, many, many times. Neurologists have been able to stimulate them in order to create happiness for decades now. In fact, neuroscience, neurosurgery and nanotechnology are on the verge of giving […]